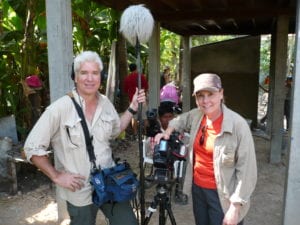 Steve and Joanie Wynn on location in Siem Reap, Cambodia

Journeys for Good and Seattle production company Bayside Entertainment were featured in a recent blog post for Shutterstock’s Premium Beat. The post, entitled “Make Your Documentaries Matter with Awe-Inspiring Material” was written by Paula Goldberg. It featured an interview with Bayside Entertainment principals Steve and Joanie Wynn on their experiences as documentary producers. The Emmy award-winning production husband and wife team spoke to the challenges of documentary production, especially those they faced during international production for their series of documentary programs, Journeys for Good. They recounted their trips in Tanzania and Cambodia, covering international volunteer projects.

As the writer and executive producer of the program, Joanie Wynn emphasized the importance of staying flexible during field production and being open to surprises. Director, DP and editor Steve Wynn explained some of the important considerations regarding the selection of camera equipment and support gear. Overall, the couple agreed that participating in the interview process was a great trip down memory lane.

Joanie and Steve Wynn continue the development of their Emmy and Telly award-winning program Journeys for Good. Their next effort features a project featuring Gen Z student volunteer travelers. As executive producer and mother of a Gen Z student herself, Joanie explained, “I believe that these volunteer trips can help to develop awareness and empathy in our next generation of leaders and global citizens. By stepping out of their comfort zones, they will learn to view themselves, each other, and the world with a fresh perspective.”

On the heels of our Emmy and Telly award-winning program,…

The volunteer industry is growing at an astounding rate. More…