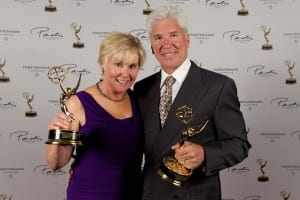 Steve Wynn won an Emmy for editing.  Steve and Joanie Wynn shared producing awards for the program in the historical/cultural program category.  The awards ceremony was held at the San Francisco Hilton on June 14th.

ABOUT JOURNEYS FOR GOOD

Journeys for Good celebrates volunteer travel with original content for broadcast and the web.Created by Emmy award-winning husband and wife production team, Steve and Joanie Wynn, Journeys for Good is an original series of half-hour programs which will be distributed nationally by American Public Television to 350+ public television stations across the US and Canada.  Recently, their pilot episode, Journeys for Good: Cambodia won three Emmy awards for producing and editing.  The success of this single program promises even greater success with a 13-part series.

Journeys for Goodwill be a KQED-TV Presentation.  KQED is one of the preeminent public television stations in the country and will support the program with a stations relations campaign to maximize national and international distribution throughout the American Public Television network. Additionally, the series may enjoy second run exposure on APT sister network, CreateTV, which features the best travel content from across public television offerings.

KQED quote about the series:

“We expect Journeys for Good to be both exciting and touching. Voluntourism is naturally fraught with conflict and yet buoyed by the human spirit and the exotic locales provide a fascinating backdrop for a compelling cast of heroes and underdogs”.

Their corporate clients include Lucasfilm, EA Games and Boy Scouts of America.  They also work with non-profits, startups and small business clients and develop original content for broadcast and the web.

On the heels of our Emmy and Telly award-winning program,…